Tavis came to Real Athletic Workouts (RAW) personal training in Hong Kong as a complete beginner. He had zero strength and conditioning experience. He grew up playing basketball casually but had never played at a competitive level. He had never stepped into a weight room, followed a structured program and had almost no knowledge of nutrition.

After training with us for 6 months, he lost 10% body fat and gained 5kgs of muscle mass. His broad jump and vertical jump increased by 10 cm each. The standing broad jump and vertical jump are used to measure lower body power. His aerobic capacity improved by 25%. A high aerobic capacity helps recover from high intensity efforts at a faster rate.

Tavis suffered from ankle pain and lower back discomfort. During his initial assessment, we determined that he was too weak to handle the impact of jumping and landing repetitively. His strength base was too low. He did not have adequate mobility and stability in his ankles, anterior chain (core, hip flexor complex), posterior chain (Hamstrings, Glutes, lower back) and shoulders (Scapular and shoulder girdle).

We then broke down the next 6 months of his training into the following 3 phases. (8 weeks each).

1) Foundation Phase:
Strength training: Rectify any structural imbalances between each limb and between the muscles of the front and the back of the body. Work on perfecting movement and mobility. The short term goal for this phase was for Tavis to be able to do the following movements without pain or restriction, using a barbell and with perfect technique and body control: Full squat, Split squat, Dead lift, Romanian Dead lift, overhead press and horizontal barbell row.

By following the Raw Personal Training movement progression he was able to achieve this in 2 months.

Conditioning: The goal of this phase was to improve his aerobic capacity. An efficient aerobic system will increase work output and improve the ability to burn fat and carbohydrate. It also makes the body more efficient during exercise. He started with 10 min, 3 times per week @70- 80 of max heart rate. We added 5 min every week for the first 4 weeks. The second 4 weeks he ramped up the intensity but his goal was to stay in the aerobic zone.

Nutrition: We wanted Tavis to develop self-awareness about his overall nutritional intake. He had little knowledge of nutrition so we taught him the basics. We asked him to write a food diary for 3 days. He then agreed to make 3 changes to his diet for the first phase. Those changes were suggested by him. We checked in with him weekly and measured his body fat once every 2 weeks.

2) Strength Phase:
Strength training: Our goal for this phase was to increase his overall strength. Slow strength and muscle mass are the foundation for explosive movements and power. The stronger an athlete is and the more muscle mass they carry, the higher the potential for explosive power and speed (There is a point of diminishing return for this). It will also drastically reduce rates of injuries. 2 months into this phase, Tavis could squat 120kgs, bench press, 90kgs, Deadlift 140kgs and perform 8 strict pull ups.

Conditioning: We introduced some anaerobic conditioning or high intensity/interval conditioning sessions to his routine. The anaerobic system converts stored carbohydrates into energy and produces lactate as a by-product. The accumulation of lactate leads to muscle fatigue. Training this energy system will help an athlete tolerate a higher levels of lactate and  therefore improve work capacity.

Nutrition: We taught Tavis how to keep track of energy input vs output. We designed a detailed, customized nutrition plan for him. Tavis’s goal for this phase was to gain muscle mass. Therefore, we included a slight daily calorie surplus.

3) Power/Peaking phase
Strength Training: We included more advanced beginner strength and conditioning methods. Our main goals for this phase were to maintain his muscle mass and strength while improving his power or rate of force development. We did this by including explosive movement into his workouts as well as increasing speed of movement.

Conditioning: We started including some plyometric work or jump training. Plyometric training works by making the nervous system more efficient at storing and releasing elastic energy. Plyometric training is high impact. An adequate strength base is required before including such methods. We eliminated the aerobic sessions but kept the anaerobic work in order to maintain a high work capacity.

Nutrition: We reversed the diet by including a slight (25%) daily calorie deficit. 25% is manageable and will not lead to any muscle loss. Tavis actually still gained 2kgs of lean mass during this phase while losing 5kgs of fat mass.

Owner & Personal Trainer, Jeremy Meyer founded RAW in January 2009. Under his guidance and leadership, RAW has produced successful body transformations and results for over 10 years. It is considered the best personal training studio in central Hong Kong. 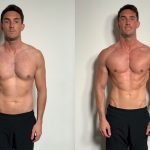 This error message is only visible to WordPress admins

Take your health to the next level.  What are you waiting for?